A stork bite is a common type of birthmark seen in a newborn. It is most often temporary. 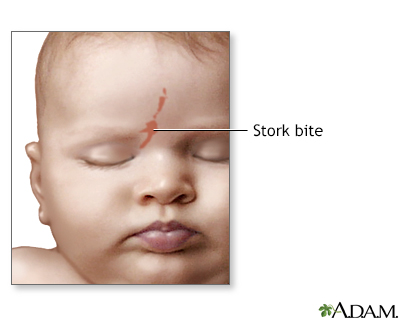 A stork bite is a vascular lesion quite common in newborns consisting of one or more pale red patches of skin. Most often stork bites appear on the forehead, eyelids, tip of the nose, upper lip or back of the neck. They are usually gone within 18 months of birth.

Stork bites occur in about one third of all newborns.

A stork bite is due to a stretching (dilation) of certain blood vessels. It may become darker when the child cries or the temperature changes. It may fade when pressure is put on it.

A stork bite usually looks pink and flat. A baby may be born with a stork bite. It may also appear in the first months of life. Stork bites may be found on the forehead, eyelids, nose, upper lip, or back of the neck. Stork bites are purely cosmetic and do not cause any symptoms.

A health care provider can diagnose a stork bite simply by looking at it. No tests are needed.

No treatment is needed. If a stork bite lasts longer than 3 years, it may be removed with a laser to improve the person’s appearance.

The provider should look at all birthmarks during a routine well-baby exam.

There is no known prevention.